My second weekend in New Zealand I went on a Christchurch Tramping Club trip to Mt Catherine, and was fortunate enough to meet Cristina Zablan, a wonderful, friendly accountant originally from Manila. After about 15 minutes into the car ride she had already encouraged me to come along on a trip to Mt Adams on November 24-25th organized by the New Zealand Alpine Club. I think my first thought was dread at requiring a third alpine club membership - AAC, ACC, NZAC, aaack! I say "requiring" with dire seriousness, because what the hell would I be doing in New Zealand if I didn't join their alpine club? Surfing? Canyoning? Skydiving? None of these boring things appeal to me.

With the ease of an email and a trip to alpineclub.org.nz my plans were set. The leader of the trip, Nina Dickerhof, informed me of the overnight plans; I had my tent, sleeping bag etc., so I felt set. I had taken a quick glance at the height of Mt. Adams (2208m), and having done the similarly moderate Mt. Catherine (2083m) I felt I had an idea of what to expect. It wasn't until a week before the trip, during a drive out to the west coast, that I realized what being on the west coast of New Zealand meant. Wikipedia reads:


There are no rainfall gauges on Mount Adams, but a gauge in Whataroa valley at the State Highway 6 bridge 10 km south-west of the summit at 60 metres above sea level, records a mean annual rainfall of 5690mm (224 inches) and daily falls of up to 320mm (12 inches)

The plan was to drive from Christchurch to a roadside campsite on Friday, then climb above the bush line to camp on Saturday at about 1500m. Thus, the summit day was originally going to be Sunday morning. Nina had been checking the forecast, and though it looked perfect 3 days out, closer to Friday it was predicting "nor'-westerly gales" for Sunday, not exactly the kind of weather you want for mountain climbing, let along camping. Nina wisely suggested a change of plans: we would climb to the campsite, drop our packs, and try to summit on Saturday evening. We could then leisurely take all of Sunday to get back down. "I know it'll be a slog, but I think it's best". As it turned out, she was quite right.

All 10 of us eventually made it to the roadside campsite on Friday, some having travelled longer than others. Wellington, Christchurch, and Dunedin were all represented (though Canada, Germany, Philippines, Scotland, England, Slovakia and New Zealand is perhaps more accurate). The roadside campsite was uneventful, except some douche decided to pull off the road at 3am, do a donut, then scream off. The following morning we managed to find the short road off of Highway 6 leading to the trailhead. I had been warned that wearing my mountain boots would be a back idea, since the first stage of the climb involved a lot of river crossing. Good advice, Rob! 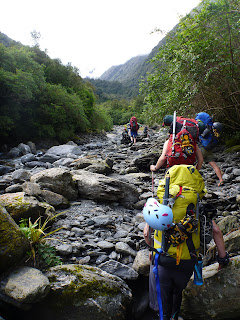 After following the river for about 2km, we managed to find the trail leading up a steep, heavily forested ridge. For a newcomer, the flora is quite magical; it's a true rainforest, and quite interesting since it's chilly and lacking in any dangerous fauna. Everything is wet. As Silvia put it, "this is the real west coast!" or something like that.
Travelling up the ridge required some serious use of tree branches, roots, and at times just grabbing at 'stuff' in front of you. The heavy packs we all carried didn't help. Having hiked in places where the locals throw a fit for so much as breathing on anything outside the marked trail, it was pretty sweet to travel a trail that was obviously marked, but definitely rugged. Perching plants, ferns, and other prehistoric-looking things make for really interesting climbing, but are often ignored when all you're thinking of is "how much further!?". Eventually we reached the bushline after looking at my altimeter about a thousand times. Travelling up ~1000m with a giant pack is a rather rare experience for me (I usually have a day pack on). It was sheer joy, I swear.

By lunchtime spirits were a little low, since we were traveling in the layer of cloud we had just been traveling under. Visibility was about 50m for several hundred meters of altitude, so hiking along what appeared to be a steep cliff was a bit of a tease.

Lunchtime brought some comedy as well, when Nina lost her water bladder down a rather deep hole. Rob dove in after it, literally:

Soon after lunch we made it to our campsite. Given that the terrain was fairly rugged, we managed to find some decently flat spots to drop our gear. At about 1400m, just above the snow line, we started to see some breaks in the clouds above us which became bigger and better as we climbed. Morale instantly became high; three cheers for Nina! "See, *guaranteed* good views! Didn't I predict it!?" Nina clearly has a bright future in the mountaineering psychic industry.
The rest of the climb was a long but moderate snow climb in mostly wet snow. Lucky for us, the weather kept getting better and better so that around the summit we had a setting sun and gorgeous views. By the time we made it to the lower summit, we agreed that it was a fine goal, as we were all pretty exhausted by this point. It had been a formidable 2100m day (~100m up to 2194m).


The way down went quite well. Perhaps it was a bit slow due to the stunning scenery that began to open up as the clouds dissipated. I'll let the photos speak for themselves: 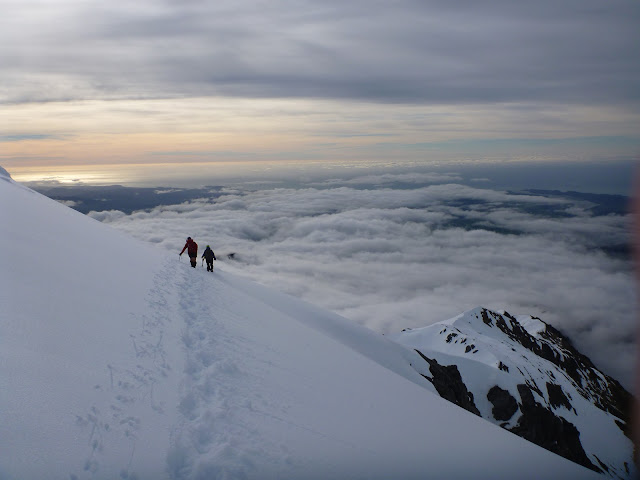 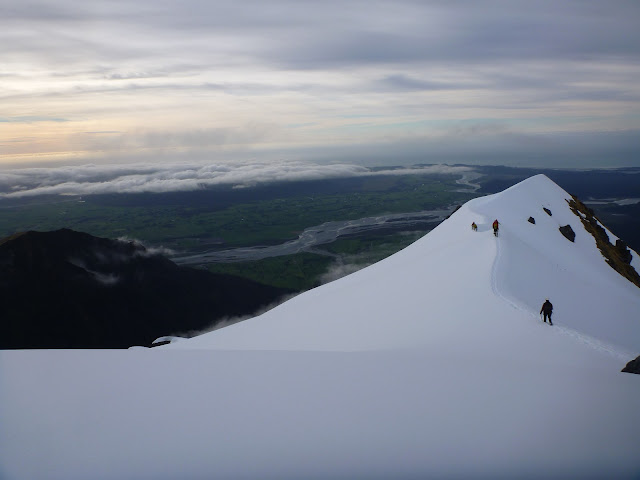 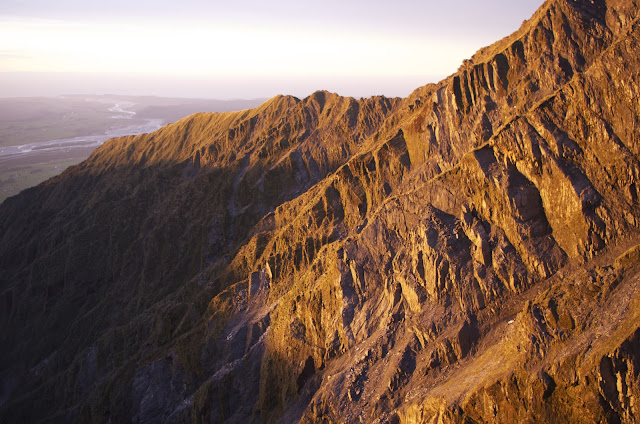 A long sleep combined with a lazy sleep-in made for a relaxing start to day #2. It was a blur getting down. One of the larger blunders of the trip occurred on the way up when I decided I no longer needed my hiking pole somewhere along the thick forest path. The only thing that would have made my placement worse would have been to paint the pole with camouflage. On the way down I didn't see it, so Rob kindly volunteered to help me find it. It was actually quite refreshing to dash back up the trail with no pack on, since you feel like a monkey swinging on trees, vines, and anything else that's within reach. Magically I found it, and was quite thankful that I had it for river crossings. Lesson learned.

I'll end the trip report with this (yet again) poorly-shot, shaky, lame, but dearly treasured video:
Thanks go to all the members of the party for making my first Kiwi camping experience really fun, their company was a true delight. Particular thanks go to Nina and Lorraine, who treated me to hot water, soup, and taught me what Milo was (as well as offering me some).

Beauty! I was in Christchurch almost to the day 3 years ago. Wish I was there now - it's bloody freezing and dark here!